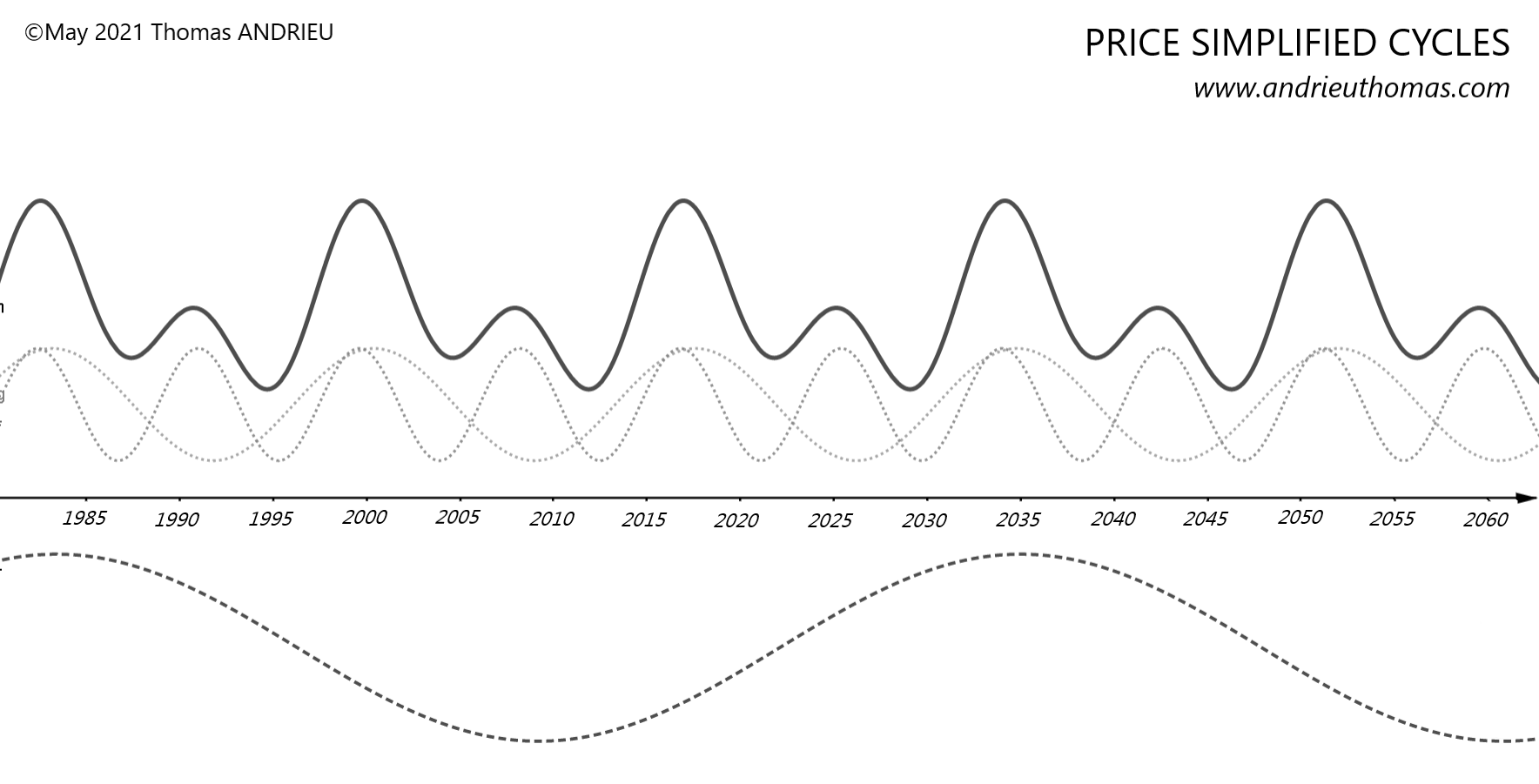 The deep structure of economy is cyclical, as if human interactions would be comparable to a system of cumulative responses, repeating over and over. Inflation doesn’t derogate to this rule. Inflation (or deflation) is generally a sign of economic volatility, which means a distortion between global demand and global offer. In my book on GOLD AND SILVER, I explained my theory of the “cycle of predominance of offer and demand”. At a certain point, there are periods when instituted economic equilibrium will produce cumulative tensions on offer or demand. It results in a short and brief change in the cycle of predominance, and consequently a major gap between offer and demand, and finally a change in prices.

A statistical analysis from lows to lows tends to show the implicit recurrence of two main cycles: a 9 years (or 8.6) cycle and an 18 years (or 17.2) years cycle [see my article on the 8.6 years cycle].  Indeed, we can refer to the study of Brian Berry on the price cycle [see book]. Major price peaks have occurred in 1814, 1864, 1920, 1974. The average long-term cycle is around 52/53 years. Berry saw the recurrence of a 54 years cycle. If we apply such a model (dividing by three and six cycles), we actually find major correlations with price moves. Nevertheless, we can develop a little bit further this analysis. A 51.6 years model cycle seems to be even more accurate. The following graphic shows detailed inflation on selected periods.

On each graphic, we have the repetition of a simple pattern: three waves up/three waves down. We also notice an intermediary major peak, followed by a major disinflation, and generally, deflation. This is the famous “Kondratieff peak”. The repetition of such a pattern indicates the persistence of main cycles. The approach proposed until now is to divide a 54 years cycle in three waves of 18 years or six waves of 9 years [Juglar Cycle], as shown below. Nevertheless, cycles correlations with prices can be improved.

The graphic above shows my new approach for statistical data on inflation. There is on long-term cycle about 52 years. Divided it by three, you get a 17.2 years cycle, which is 2 cycles of 8.6 years. The combination of these cycles is modelized in this graphic, also available on my website (www.andrieuthomas.com). The correlation with prices is extremely evident for the XX and XXI centuries. We conclude here in three dynamics:

Growth is generally associated to economic expansions. Simply written, growth and inflation are partly correlated. The graphic above shows the World Annual GDP growth. The average trend is defined by the following equation: y = -0.0453x+4.875. By resolution, a continuity of the observed trend in the last 60 years should lead to an average world growth of 0%, around 2067.

This approach is extremely correlated with demographic projections, public debt impact, and productivity evolution. Furthermore, we will note that the potential growth for Japan and Europe on this decade is around 0%. On the long term, a slow in economic growth should lead to a slow in inflation. Moreover, as shown in the previous graphic, we will note that the 2060-2065 period could be marked by strong pressures on growth and prices.

We enter in a new economic area!

By Thomas Andrieu | AUTHOR AND REDACTOR